Jaguar delivered this XK120-M “open two seater” in July of 1952 through the Hornburg dealership in Los Angeles. The car turned up in February 1955 at Willow Springs Raceway, entered and driven by Howard Fanning of Los Angeles as one of 16 Jaguar XK120s in the “Stock” C class. The car’s racing career was short-lived and ignominious, however, as it was heavily damaged in what turned out to be California’s most disastrous and heavily criticized sports car road race.

Killed at Willow Springs; Spectator Mowed Down in Crash.” The article reported that driver Bill Powell died at the event after “his 500-cc race car went out of control and rolled during a practice run.” And three Jaguar XK120s were heavily damaged in the large-bore production car race, which was called after four laps. Noted California racer Frank Monise, Sr., driving the No. 59 Jaguar XK120 coupe, “lost a wheel coming into the east turn of the course” (Turn 8, the track’s highest-speed turn), the article reported, and “ran off the track [and] rolled several times. “Shortly after the Monise accident,” the article reported, Fanning “skidded, rolled and crashed” his No. 68 XK120-M roadster. Jack Graham, driving the No. 30 XK120-M roadster also crashed, but ran long enough to claim second place behind Jim Peterson in his No. 83 Jaguar XK120-M.

Although the Bakersfield Californian article reports that Monise’s car hit a spectator and that Fanning skidded as a result of fluid left on the track from the Monise incident, the photographic, documentary and eyewitness evidence suggest otherwise. The Fanning and Graham roadsters crashed between Turns 1 and 2, where the photographs show them resting forlornly after the event, and where spectators were crowded between the track and parking lot during the race. Graham ran long enough to finish in second place, while neither Fanning nor Monise made the podium. And Monise alone crashed at the remote Turn 8, far from any spectators. If a Jaguar crashed from a fluid spill from another wrecked Jaguar, as the newspaper reported, it was likely the Graham roadster that crashed after Fanning.

In any event, Fanning, Monise and the injured spectator, the Californian reported, were all “taken to the Lancaster hospital with major injuries.” Fortunately, Fanning, Graham and Monise all lived to continue racing, Fanning for a handful of events in an MGA, Graham for many events, initially in his damaged Jaguar and then in an Aston Martin, and Monise in well over 100 events in a variety of race cars, but never in another Jaguar. Indeed, Monise stripped his Jaguar coupe and sold the chassis, the only remaining usable portion, while continuing to make payments on the car.

Because of the carnage, the promoters, the California Sports Car Club and the Long Beach MG Club, were subjected to withering criticism from the racing press. Powell’s death was “the first driver-fatality in West Coast sports car racing,” Road & Track noted, and the event, “which saw one fatality, one critically injured driver, one badly injured spectator, one injured official and several wrecked automobiles, was badly organized,” with “too many over-eager drivers, no provision for driver tests to prove proficiency, poor crowd control, inadequate flag-men, superficial technical inspection, disorganized ambulance service and in general a complete lack of appreciation for the fact that the future of sports car racing rides on every event.” Another promoter, RRR, took over the Willow Springs Road Races the following year. 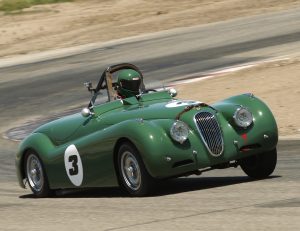 Soon after the Willow Springs debacle, Robert Colgrove, an auto body shop owner from Riverside, California, purchased a pair of wrecked Jaguars, a chassis and the entirety of the rolled roadster. Colgrove replaced the roadster’s leather interior trim with black vinyl, replaced the stock seats with bucket seats, hammered the body back into shape, and painted the car “gas tank orange,” before realizing that the front suspension was damaged beyond his capability to repair. The car sat unused in his auto body shop until 1970, when Colgrove sold the car (along with the chassis and a set of photos of the wrecked Jaguars at Willow Springs) to Ellis Lewis, who hoped to return the roadster to the road as a driver. Lewis used the chassis as a rolling cart to store Jaguar engine blocks and transmissions. Stymied by the badly bent front suspension, Lewis stored the roadster in his Riverside barn until 2006, when he sold it to the present owner. 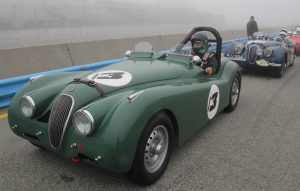 After a ground-up restoration by Fabozzi Metal Works in Norco, California, the roadster sports a suede green exterior and suede green leather interior, a standard XK120 color combination. The roadster returned to Willow Springs in 2011 and first ran at Monterey in 2016, in both events tended by a crew headed by previous caretaker Ellis Lewis. And in 2015, 60 years after the Willow Springs debacle that marked the car’s ignominious motor racing debut, Frank Monise Jr., son of Frank Monise Sr. and an eyewitness to the events that unfolded that fateful weekend, drove the car round “Big Willow,” retracing the path his father had taken for those four fateful laps and indeed Frank Jr. had taken as a boy riding in his father’s and his friends’ Jaguar XK120s.