Dave Nelson’s Triumph TR2, aka TR2 55, rolled off the assembly line, at the Triumph factory in Coventry, England, on July 11,1955

In 1954, the first TR2 to appear at the Pebble Beach Road Races, was the car of Lt. Col. Bill Harris. He had the car shipped from France, and was the first appearance of a TR2 in a race on the west coast. He finished a credible 12th place in the Cypress Point Handicap race. 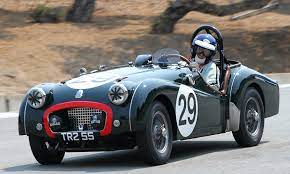 Dave bought TR2 55 off of Ebay in 2002. Coming from Florida, it was a real 10 footer. Beautiful in its Signal Red paint, but a nightmare in the rust that was found under the fiberglass. After a 3 year restoration . TR2 55 was returned its original color of British Racing Green, and with a few period modifications , such as 4 wheel disc brakes. It made its first west coast appearance at the 2005 Wine Country Classic, winning the trophy for its race group.

Following the success of Bill Harris in 1954. Eight TR2’s appeared for the 1955 running of Pebble Beach. Seven cars vying for the Cypress Point Trophy and one going for the Del Monte Trophy. With Wally Kieckhefer finishing in sixth place in the rain soaked event. 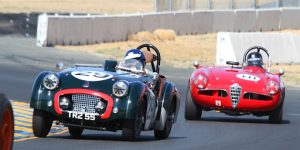 By 1956 most drivers had opted to race the new TR3. But Ed Kretz finished a fine 15th, in the Del Monte Trophy race, in his TR2

In 2006, fifty years after Ed Kretz and his TR2 last ran in the Del Monte Trophy. Dave Nelson’s TR2 55 has taken up the  mantle as the lone TR2 competing at the RMMR and as part of the new Del Monte Trophy Race Group.