Peter Darnall, the fine motorsport writer and photographer, wrote a superb piece on the Jaguar XK120 the first year it raced. What follows is that article.

I’ll admit to partiality when it comes to XK120 Jaguars. Naturally I was drawn to Tim Barnes’ beautiful 1951 roadster in the covered area of the paddock. The leather straps holding down the long louvered hood and the dual Brooklands windscreens were the tip-off. This was not a meticulously detailed restoration to showroom stock specifications. Tim’s Jaguar is a racer very much in the tradition of Ian Appleyard’s famous NUB120 that dominated the early fifties rally events or, with the dark blue color, perhaps reminiscent of David Murray’s Ecurie Ecosse team cars.

“The color is supposed to be Jaguar’s Pacific Blue,” Tim said, “but no one seemed to know exactly what the color was.” His inspiration was Lance Reventlow’s original Scarab. As a boy, he had seen the Scarab under construction in his uncle’s shop in Southern California. His uncle, Tom Barnes, in partnership with Dick Troutman, operated Troutman & Barnes, one of the most successful race car fabrication shops in Southern California in the post-World War 2 years. Lance Reventlow had chosen Troutman & Barnes to build his Scarab cars and had specified the distinctive blue color for his creations.

Tim found his Jaguar half buried in an orchard in the San Joaquin Valley in the spring of 2002. Work to extract the car began in the summer of that year. Tim is a professor of American History at Cal Poly. He did the restoration work himself, learning the skills of sheet metal fabrication and engine building under the tutelage of professionals. The entire restoration took more than seven years and he noted that the project was “in stark contrast to his life as an academic and in that way appealing.”

The high point of the restoration came on the day the engine was fired up on the dynometer. Tim proudly watched as his engine was put through its paces and performed perfectly. He recalled that at 6000 rpm it was still making power when, much to the disappointment of the real engine builders, he halted the test because “I simply could not imagine that something that I had put together could endure such stresses.

The white number “138” on the Jaguar is also significant. Tom Barnes painted that number on the original Troutman-Barnes Special for its first outing at Willow Springs in 1954. Sadly, Tom Barnes passed away before Tim had finished the restoration. In their last telephone conversation, Tim recalled that his uncle was very gratified to hear that #138 would return to the tracks once again. He referred to Tim as “Jag Man.” Perhaps the highest compliment Tom Barnes could give, recognizing the superb restoration his nephew had carried out. 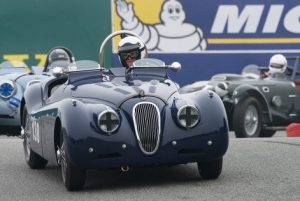 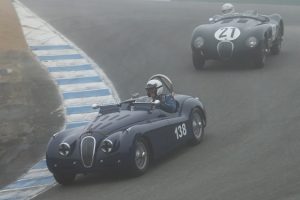 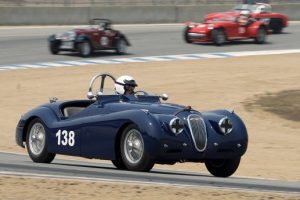 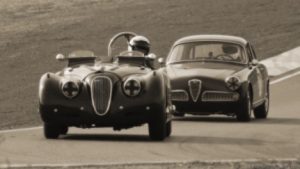