The Parkinson Jaguar was originally an aluminum bodied Jaguar XK-120 roadster (#670191), one of the first of the new Jaguar sports cars to arrive in California. Don Parkinson, a young Los Angeles architect and sports car enthusiast, drove it to Pebble Beach to show in the 1950 Concours d’Elegance and to race in the inaugural Pebble Beach Road Races. He finished 2nd in the Pebble Beach Cup race. Returning to the forrest in May 1951, he lost control of the car in Turn 3 and crashed into a pine tree. The remains of the wrecked roadster became the Special.

The Parkinson Jaguar Special was built at Rodger Barlow’s International Motors in Los Angeles, by Joe Thrall, Parkinson and Phil Hill (Parkinson’s brother-in-law). The aluminum body was sketched by teenager Robert Cumberford and built by Marvin Faw. Chassis, running gear, and engine were reused with little modification, although the Special weighed 1000 pounds less than the roadster. Ritchie Ginther subsequently hot-rodded the engine and increased its capacity to 3.8 liters.

Parkinson raced his Special at all of the major West Coast road races in 1951 and 1952 with excellent results, including a win at Palm Springs. It was raced by others, principally Chuck Daigh, to continued success through 1955. The Parkinson Jaguar competed at the Pebble Beach Road Races in 1950,1951,1952,1954 and 1955. It has been a regular participant at the Monterey Historics/Reunion since 1983 and is entered in the Del Monte Trophy Race Group at the 2017 Monterey Reunion Laguna Seca 60th Anniversary Races. 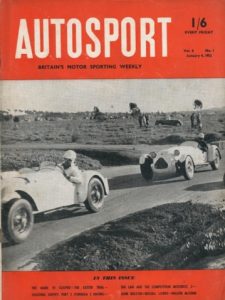 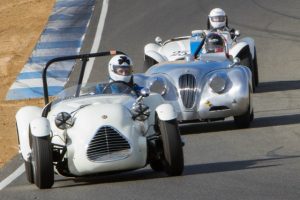