The Hagemann Jaguar Special was built from the ground up in 1955 by Babe Sulprizio, who then owned United Engine & Machine Shop and Silva-Lite Piston Company in San Leandro, California. The drive train, suspension, and brakes were mostly Jaguar and the custom-fabricated tube frame was inspired by the C-Type Jag. Sulprizio built the chassis to take one of the new Chevy 265 V-8s, but the local Chevrolet assembly plant in Oakland refused to sell him one without a car around it, so he installed a 302 GMC (“Jimmy”) 6. After the engine failed in its first race (at Stockton) it was replaced by a 3.4 liter Jaguar DOHC power plant from an XK 120. The suspension utilizes longitudinal torsion bars and the diff is located with a transverse link connected to one side of the chassis. As was typical with race cars of this era, particularly the specials, numerous mechanical upgrades and improvements were added along the way. For example, the brakes were originally XK 120 drums, but after my first race in the car at Laguna Seca in 1976 (no brakes at all by the sixth lap), I replaced them with XK 150 discs. 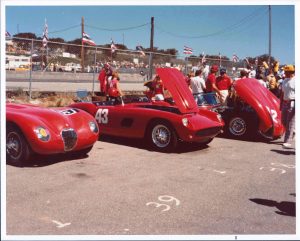 The beautiful one-off aluminum body was fabricated by Jack Hagemann, one of the premier race car body builders in the fifties and sixties. Jack once told me that he wanted to show-off his metalwork by polishing the aluminum rather than painting it (like his Webster Can-Am car), but Sulprizio insisted that it had to be red, and so red it was. The body has a strong Italian influence (e.g., Ferrari Mondial/Monza) and I quickly tired of being asked, “What model Ferrari is that?” so I repainted the car in British-American Racing Green, i.e., BRG with a lot of good old American metalflake added, and no one has asked the Ferrari question since. There were actually two Hagemann Jaguar Specials, the Sulprizio car and the slightly smaller car he built for Dan Cozzi.

California, Sullrpizio traded it in for a new E-Type roadster and for a while the car resided in the corner window of Oakland British Motors. It was purchased by Bill Barrington and then by Al Bourdet who used it to commute between his homes in Berkeley and Squaw Valley. I acquired the car from Bourdet in 1976. For the next twenty years or so, the car was maintained and race-prepped by Ivan Zaremba, initially at Griswold & Co. in Berkeley and then at Phil Reilly Co. in Marin.

In 1961, after having raced the car at several tracks around Northern 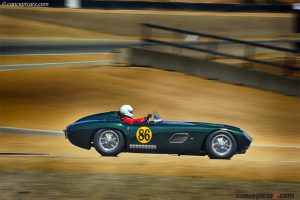 The Hagemann Jaguar has been entered in nearly every Monterey Historic event since 1976, and many at Sonoma. For the first thirty-odd years, I drove it and then turned the keys over to Bernard Juchli. Bernard worked on the car when he owned and operated a Jaguar restoration and repair shop in Los Gatos and successfully raced his well-known green and yellow E-Type coupe all over the West Coast. Whereas I typically finished somewhere in the middle of the pack, under Bernard’s stewardship the car is a frequent class winner. Bernard now manages Jay Leno’s restoration shop at the Big Dog Garage in Burbank, where the car usually resides for part of the year. The “Jay’s Garage” website has a great twenty-minute video of Jay driving the Hagemann.

Number 30 in our series of cars in the Del Monte Trophy Race Group at the Monterey Motorsport Reunion. Posted by Marcus Bicknell. Please email me at [email protected] with picture and details of your car if you have not been featured yet. 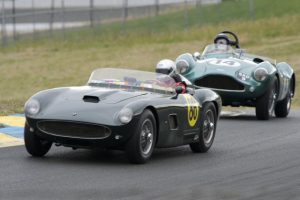 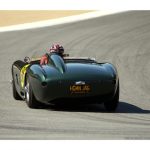