Frank Kurtis decided to build a sports car based on his 1952 500A Fuel Injection Special Indianapolis  car. The 500S series sports cars were built at Kurtis’ shops in Glendale California between 1953 and 1955.  Some 30 race cars and kits were sold including 12-15  built by Kurtis.

This car was purchased by a Doctor in Fresno, California whose intention was to race it. The engine chosen was a small block 240c.i. V8 Dodge Hemi which, in race trim, with 3 Stromberg 97 carburetors, developed about 250hp. The Kurtis torsion bar suspension is attached to front and rear live axles. The differential is a Hallibrand quick gear change unit. Brakes are Lincoln drum type. Bodywork is aluminum except for fiberglass nose and tail sections. Wheels were 16″ magnesium.

The car was raced at Bakersfield, Reno, Moffett Field and Pebble Beach in 1954. Subsequently, it was road raced in Colorado and New Mexico.  It was turned into a hill climb special in 1964 for the Pikes Peak Hillclimb. The Dodge Hemi motor was replaced by the first of a series of ever-larger Chevrolet V8s as the car moved from the sports car to the unlimited category from 1964 through 1969. It was a strong contender but not a winner.

After nearly 35 years of single family ownership, the 1953 Kurtis 500S Dodge returned to road racing in the late 1980s and has been vintage raced on the East Coast since that time.  It is presented as it raced at the 1954 Pebble Beach Road Races. 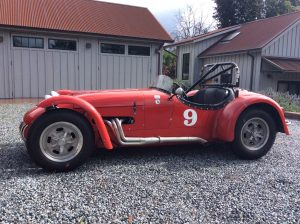 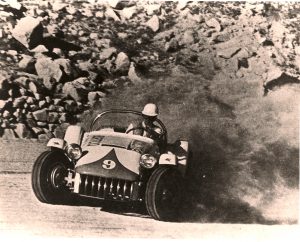 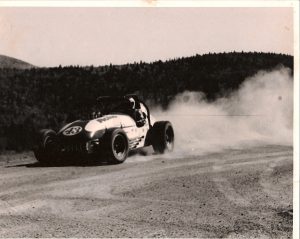