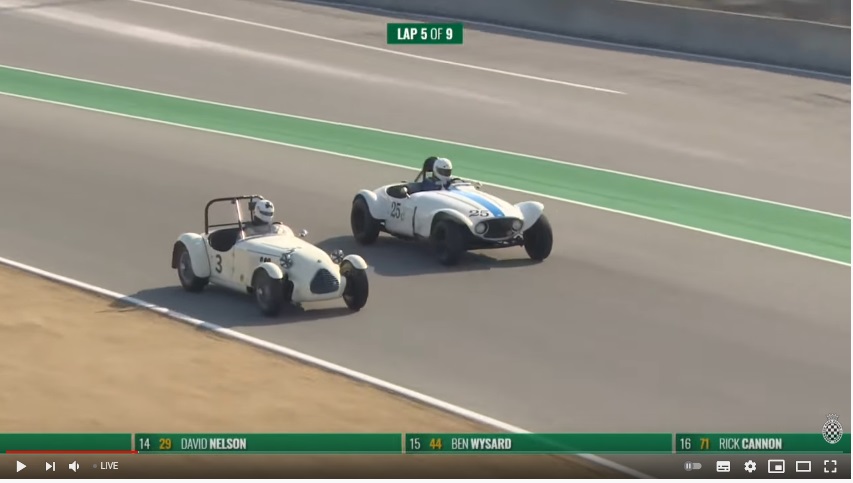 Our 24 sports racing cars from 1948-1955 rolled up to the start at Laguna Seca at 10h45 on Saturday as the morning mist lifted off the top of the Corkscrew.  In pole position, Rob Manson’s red #9 Kurtis 500S Dodge but the white and blue 1953 Tatum GMC Special driven by one of our most eminent guests, Blake Tatum, son of the car’s creator Chuck Tatum and a well-known racer, Editor of “The Wheel’ and Board Member of the Northern California Region of the SCCA, out-dragged him over the top of the hill. The other big bore V8 Californian road racers were line astern…, Skip Streets in the yellow #15 Streets Manning Special (son of the car’s co-builder John Streets), John Buddenbaum in the white #3 Jaguar Parkinson Special and Don (‘Slim’) Pepperdene in the dark blue #77 blue Baldwin Mercury Special.

But John “quick-start” Buddenbaum was not going to stay in grid order exiting the Turn 2 hairpin a few hundred yards later.  He turned tighter than Tatum and it was he who emerged in the lead heading for Turn 3 for the first time. Rob Manson, Skip Streets and Slim Pepperdene were on their tails. These five cars had already made a small break from #183 Lars Mapstead (Jaguar XK120, sitting admirably high after qualifying), #60 Gregor Magnusson (Porsche 365 Coupe), #51 Stuart Hanssen in his striking alloy-silver #51 Baldwin Special, #13 William Rooklidge (Jaguar XK120) and #63 John Mote (Allard K-2). That was the top ten at the end of lap 1.

All this action was being viewed by me on the live stream, at https://www.youtube.com/watch?v=0M40SjhDf74 which you can still access now to have a look yourself.

Lap 2 started with excitement when Blake Tatum took on a pace suited to the multiple Regional Formula Vee Champion which he is, and bustled down the hill through the shallow Turn 1 hot on the gas. Whoops. Hairpin coming. The4-wheel lock-up under braking was a joy to behold for everyone except the car’s owner and blew clouds of rubber smoke into the morning air for 50 yards into Turn 2 and half way round it. The commentators surmised he had blown his engine, such was the smoke, until they saw Tatum continuing to chase after Buddenbaum. Now they settled momentarily and at the end of Lap 2 it was the five big V8 specials in line astern, Buddenbaum, Tatum, Manson, Streets and Pepperdene.  Mapstead, Magnusson, Hanssen, Rooklidge and Mote still made up the top ten. Down the field the battles raged, the order being #33 James Alder 1952 Jaguar XK120 OTS), #72 Leland Osborn (1955 Crosley Shannon Special), #14 Robert Davis (1953 Siata 208S), #55 Kaiden Marouf (1951 MG TD Special), #29 David Nelson (1955 Triumph TR2), #44 Ben Wysard (1952 Porsche Glockler), #1 Bernard Dervieux (1950 Allard J2), #58 James Cleary (1955 Crosley Cleary Special 1), #114 Jean Pierre Molerus (1954 Nichols Panhard Special), #71 Rick Cannon (Cannon Mark 1) and #116 James Smith (1955 Rae Special). #2 Tazio Ottis (white and blue 1955 Ferrari 750 Monza) was trailing at the back due to overheating problems and he retired shortly afterwards. They got it fixed for Race 2 though… read on.

Now we settled down for a couple of laps. By lap 5, Skip Streets in the #15 Manning was wondering whether he could nip by Rob Manson… Streets pushed the Manning along and starting hanging reh back ou under acceleration, especially a leary one on lap 5 at Turn 6 coming up the hill towards the Corckscrew, which drew gasps from the commentators. Blake Tatum had not given up either and by the end of lap 5 he felt that Buddenbaum was waning. Under the bridge on the home straight and Tatum took the lead under braking to Turn 2. All that locking up on Lap 2 at the same place was just a rehearsal. Tatum-Tatum in the lead. Close viewing of Buddenbaum showed that his Jaguar Parkinson was understeering (pushing) on several medium speed corners and by lap 7, Tatum was stretching his lead and Rob Manson in his Kurtis was snapping at Buddenbaum’s heels.

Most of the drivers were aiming to complete their 9 laps with a view to having cars in onme piece for the Rolex feature race tomorrow Sunday. Except, that is, Blake Tatum who was having much too much fun in the lead. On the final lap Blake Tatum had a massive lock-up going into the Corkscrew but he kept it together and maintained his 4 second lead over John Buddenbaum, still in second with Manson and Streets in attendance. Pepperdene had dropped off from the top four but was out-of-sight clear from Hanssen, Magnusson and Mapstead.

Blake Tatum brought the Tatum built by his dad home in first place, Buddenbaum hung on for 2nd ahead of Manson and Streets (photo above). Here’s the finishing order as seen on screen, and subject to official confirmation:

For your publication or web-site you may download many period and modern images of these 1950s road-racers at https://drive.google.com/drive/folders/1hz5SYuv48FF_2292kA0St2pd09EYkezx