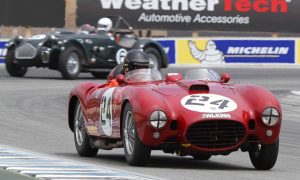 incenzo Lancia (1881-1937) founded the Lancia Automobili S.p.A. motorcar company in 1906. He had been a successful racing driver of Fiat cars, but his Lancia company concentrated on innovative sports and touring cars. The Theta of 1913 was the first European production car to feature a complete electrical system as standard equipment. Lancia’s first car adopting a monocoque chassis – the Lambda, produced from 1922 to 1931 – featured “sliding pillar” independent front suspension that incorporated the spring and hydraulic damper into a single unit (a feature that would be employed in subsequent Lancia’s, up to the Lancia Appia that was replaced in 1963). Lancia in 1948 produced the first 5 speed to be fitted to a production car (Series 3 Ardea). Lancia premiered the first full-production V6 engine, in the 1950 Aurelia, after earlier industry-leading experiments with V8 and V12 engine configurations. It was also the first manufacturer to produce a V4 engine. Other innovations involved the use of independent suspension in production cars (in an era where live axles where

common practice for both the front and rear axles of a car) and rear transaxles, which were first fitted to the Aurelia and Flaminia models. This drive for innovation, constant quest for excellence, complex construction processes and antique production machinery meant that all cars essentially had to be hand-made. With little commonality between the various models, the cost of production continued to increase greatly, while demand did not.

After the death of Vincenzo, his wife Adele took over and kept Lancia afloat during WW II. At the young age of just 24 years old, Vincenzo’s son Gianni Lancia (1924-2014) took over the Lancia motorcar company in 1948. Gianni Lancia was assisted by the brilliant engineer Vittorio Jano. With the expertise of Jano, Gianni Lancia decided to renovate the already existing Ardea and Aprilia and in doing so hit upon a new model, the Aurelia B10. The powerful Aurelia, with the first pro 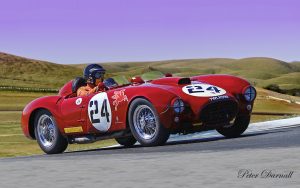 duction 2 liter V6, was a powerful, superb-handling dream. It wasn’t long before some clients begun using them in hill climbs and other competitions. When the B20 version hit the market, it was an instant success. It had a 2 liter V6 engine, a short-wheelbase, and a Ghia designed and Pinnenfarina-built 2-door GT coupe body. The Aurelia B20 coupe, although designed as a sports touring car, was used by owners in racing. When the 2 liter B20 Aurelia GT coupe, driven by Bracco and Maglioli, finished second in the 1951 Mille Miglia (beaten only by the 4.1 liter Ferrari America of Villoresi) Giannia Lancia decided to build a purpose-built sports-racer. 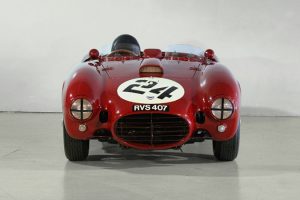 Gianni’s enthusiam for racing led to the development of the Lancia D24, which was built regardless of cost. Introduced in 1953, the sophisticated design of the D24 was leagues ahead of anything produced by rival manufacturers at the time. The D24 had a steel tubular space frame and an aluminum body by Pinninfarina. The D24 featured large inboard front and rear drum brakes, a four-cam, twin-plug, dry sump V6 engine and a 5-speed rear-mounted transaxle. The car had near-perfect weight distribution and low unsprung weight. It weighed just 830 kg and the 3.3 liter engine produced some 265 bhp at 6200 rpm and a top speed of 162 mph. 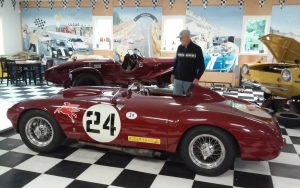 There are two surviving original D24s, one in a major European museum, the Museo Nazionale dell’Automobile in Turin. There are four reconstructed cars using many original parts including original engines, reconstructed in the 1980s by Luciano Basso, the Lancia museum’s official restorer, and by Guido Rosani, a highly regarded engineer whose father was a director of Lancia in the 1950s. These four D24s were built exactly to the original drawings as Basso and Rosani had the aid and support of Lancia and Pininfarina.

Peter Giddings has owned a Lancia Lambda for years. His interest in Lancia resulted in his acquisition of the Lancia D24 and a D50A.This car, chassis number D24R #0002, uniquely fitted with engine number D25 #0001 (the only D24 fitted with a D25 engine), is perhaps the most successful of the four reconstructed cars. It has competed in many international historic events during the past twenty years.

The car Bruce is driving today, has one of the later D25 motors, so the ultimate example of this model. At the end of 1955, Lancia retired from racing and the racing department while being disbanded was instructed to scrap the cars and most of the parts, so with the exception of a car gifted to Juan Peron of Argentina, the cars ceased to exist.

In 1980, with permission and assistance from Lancia, and with the help of Pinin Farina four cars were reconstructed in Turin with most of the work done by Basso, a long time supplier of parts for vintage Lancias, using the drawings to make the mechanical parts substantially as they were originally constructed. This is one of those cars. 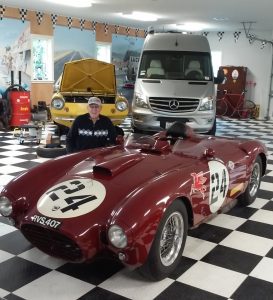 …and a parting note from Bruce Trenery:

The car belongs to Peter Giddings of Danville, and is driven this weekend by Bruce Trenery. Bruce has been driving since 1969 and has been coming to Laguna Seca since the mid 1960’s to watch the CanAm, TransAm and other races. Bruce has raced everything from most SCCA classes, to Lola 70, and various IMSA classes like GTS and World Sports Car over the years. During the first years of the historic races at Monterey, Bruce drove his Lancia B24S Aurelia, which is still in the family. It is an honor to be allowed to drive this wonderful car, that I remember reading about as a boy. Sometimes boyhood dream, do come true.