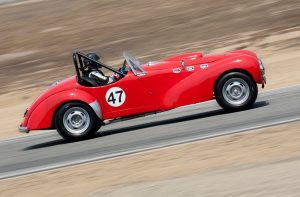 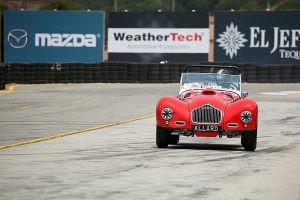 his Allard K2, chassis # 3035, was originally setup for a Ford Flathead V8, then later converted to Cadillac power. It was sold in 1978 by then owner, Tony Krivanek, and the next owner place a classified ad in the Los Angeles Times in 1983, at which time James Degnan spotted it for sale. Jim, having seen an Allard while attending the 1982 Monterey Historics, was keen on driving one in anger himself and had been on the lookout for such a car. 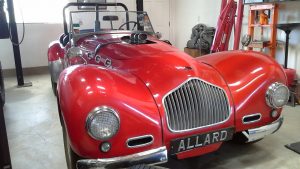 The Allard was in a rough state and in need of quite a bit of work to bring back to running order. Jim then proceeded with the completion, including a bare aluminum respray and made the necessary modifications for vintage racing, fuel cell, fire system and the like. Jim began racing the K2 in 1984 and for the next 25 years he campaigned it at many of the West Coast racetracks (over 100 times). In addition to participating at Laguna Seca, the K2 ran at Willow Springs, Riverside, Fontana, El Toro, Coronado, Portland and the Los Angeles Times GP, to name a few. 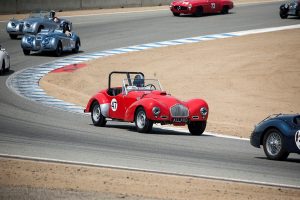 n early 2001, I met Jim while he was visiting family that happened to be neighbors of mine at the time. When he learned that I had been attending the Monterey Historics for many years he kindly invited me to stop by his paddock space that summer. Over the course of the next few years we became friends and I would occasionally help as a “crew member” on the Allard and was educated on its workings. I was also introduced to a few of Jim’s fellow racers. One of those was Michael Sharp, who had participated in La Carrera Pan Americana several times. Michael, seeing that I had an interest, asked me to be his navigator in 2006 in the Historic A class. For anyone that has not participated in a high speed closed course rally, it is truly one of the most exciting events in motorsport. After completing the event I was hooked. Michael and I then built up a Ford Falcon Sprint for Historic C in 2007, and spent the next few years sharing driving and navigating duties in the Pan Am and Chihuahua Express, including a stint at Pikes Peak. By this time, I was looking to go vintage racing and Jim offered up his Lotus 51. Three years later h 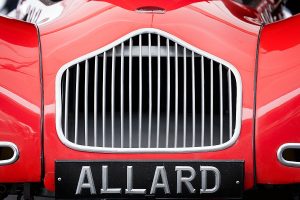 e asked if I would like to race the Allard at the Reunion. Of course, I accepted this gracious offer. We came to an agreement where I would acquire the K2 in 2015, and I proceeded to prepare it for the 2016 racing season. Most of the heavy lifting had been done prior, so it was a matter of a few upgrades to the cooling, brakes and fuel systems. It still wears the patina of 25 years of continuous track duty, which I intend to preserve. While the steering precision and braking ability are still a bit lacking, the car is a pleasure to drive (slide) around a racetrack and the Cadillac engine provides plenty of motivation. In time, I hope to learn the early history of the car and track down its previous owners.

Most vintage racing organizations share a motto…” It’s all about the cars”, or something similar. Meaning, it is not about the current drivers or custodians. It is all about seeing these living, breathing pieces of automotive history doing what they do best. Of course this is true, however, our sport is also about the people, the comradery and the friendships made along the way. It is these things that will keep it alive for the next generation of enthusiasts.

Some generic information about the Allard K2… 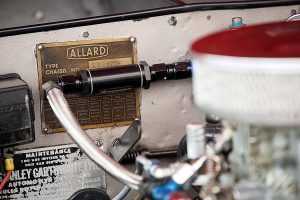 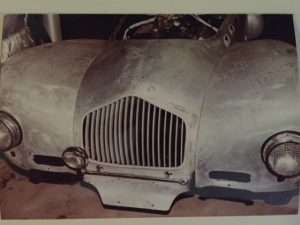 Sydney Allard was a stouthearted racing driver and car constructor. In the 1930s, he had built a dozen Ford-based specials for British trials competitions, some with Lincoln engines and many with a split-axle independent front suspension developed by Leslie Ballamy. During World War II, his London garage rebuilt Ford vehicles for British forces. In 1946, with plenty of engines and parts on hand but no government contracts, Allard introduced the K1, a two-seater on a box-section frame with transverse leaf springing and Ballamy’s independent front axle. Either Ford or Mercury flathead V-8 power was available. Light and powerful, the K1 boasted excellent acceleration. It was succeeded by the J1, a shortened K1 intended for trials and sprints, and a four-seater, the M1.

As the J1 became the J2, so the K1 evolved to a K2 version in 1950. The aluminum body was redesigned, adopting a smoother look with a Healey-inspired grille. The Ballamy front suspension was changed from leaf springs to coils, and De Dion rear suspension was optional, as were wire wheels. Although normally built with Ford or Mercury flathead V-8s, K2s could be ordered to accept more powerful engines, usually installed at destination prior to delivery. Most Allards destined for the United States, llike the batch of 18 Allard K2s in 1952 were shipped to R/P Imported Motor Car Company in New York City, where engines were installed. They were then sent to dealers, like Max Hoffman in Manhattan. This car, however, was invoiced direct to Jack Pry in Washington, D.C. Pry was one of the early D.C. dealers in imported cars, handling at one time or another Rolls-Royce, Jaguar, and Rootes Group cars. He later became the major Volkswagen dealer in the District.