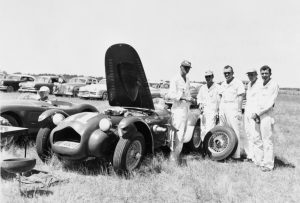 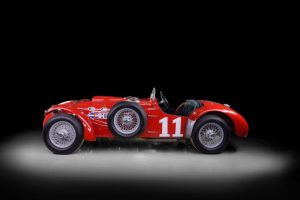 This splendid Allard was purchased by Australian Joe Calleja in about 2018 and driven to victory in the 2019 Rolex Monterey Motorsports Reunion – 1947-1955 Sports Racing & GT Cars group – by John Bowe, also Australian. 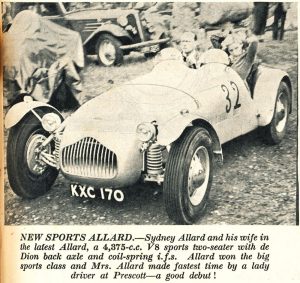 We turn to the text of a useful article from 2015, credited at the bottom of this page…

One of the fastest Group 1 racing cars circling Road America during the recent Elkhart Lake Vintage Festival was a 1953 Allard J2X. Carroll Shelby drove the Allard for Texas businessman Roy Cherryholmes back in the ‘50s. Nowadays the car belongs to Augie Grasis III, of Kansas City, who seems to like old racing cars that were owned by famous people and have links to his hometown. Grasis also owns a ’33 Studebaker 2-man Indy car that was driven by Tony Gulotta, a legendary racer who just happened to hail from Kansas City.

Carroll Shelby was a through-and-through Texan, but his co-driver in the Allard during the 1954 World Championship Argentine 1000 Kilometer race was Dale Duncan who, like his brother-in-law Maston Gregory, was from Kansas City.

Grasis says he didn’t buy the car because Shelby drove it. “They don’t come up that often,” he says. “People typically buy them and keep them, so I probably would have bought it no matter who was connected with it. The fact that Carroll Shelby drove it was just the icing on the cake.”

A history of Shelby by Michael T. Lynch says that he drove Allards owned by Charles Brown and Roy Cherryholmes, but it doesn’t say which car came first. Auctioneer Dana Mecum knows the answer to that question. According to Mecum and his friend Kevin Caulfield, Shelby’s road racing career began in 1952 in an MG TC. He then caught the attention of Charlie Brown a Louisiana businessman who owned an Allard J2 chassis number J2179. Later that season, Brown wanted a driver for his J2 and turned to Shelby. 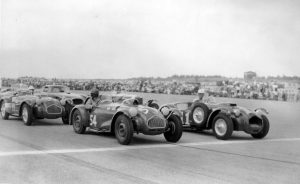 The following season Shelby was invited to drive Cherryholmes’ J2X/3146 that was then owned by Augie Grasis. It competed in about 10 races and won nine. “Most were SCCA (Sports Car Club of America) races in Texas,” Grasis said. “But in January 1954 they took the car to Argentina to compete. Aston Martin team manager John Wyer saw Shelby race and offered him a job.

“The Allard was kind of the start of Shelby’s professional career,” Grasis e

xplained. After Shelby raced it, it went into a barn and resurfaced around 1970. After a string of owners, a man named Peter Booth ultimately got the car and re-restored it to the exact livery it was in when Shelby raced it.

Booth took the car to the 1990 Monterey Historic Races at Laguna Seca where Carroll Shelby drove it. He signed the car, too. Grasis bought it in about 2013. “It’s a lot of fun and we’re having a lot of fun racing it,” he said. “We brought it here to Road America and this is only the second race we’ve had it at. It’s going to be a few years before we get it all sorted out.”

Grasis said he looked forward to taking his J2X to the Colorado Grand and other rallies because it’s a fast, powerful, wind-in-your-face type of car. “It is something that we are going to enjoy and treasure,” said Augie. “We will try to get out to a lot of events so people can see it and enjoy a piece of racing history.”

With thanks to Racing Junk for the  fine article above.
https://www.racingjunk.com/news/2015/10/22/shelbys-old-allard-is-still-racing-strong/

The Allard Register wrote up the 2019 Rolex Monterey Motorsports Reunion. John Bowe drove Joe Calleja’s Allard Cadillac J2X to victory in the second race so we reproduce, with thanks to Colin Warnes, their article here in full…

Four Allards made up a part of the thirty-car race group 1B for 1947-1955 Sports Racing and GT Cars. The Allards were up against a strong group of California Specials, Jaguars, Mercedes, MG’s, Triumphs, Porsches, and a few flyweight H-Mod specials.

Sunday’s morning race was action packed. As the green flag waived, John Bowe rocketed past the third and second place cars and was challenging Rob Manson’s GMC Tatum Special for the lead by the first corner! After a few laps of trying to get past the Tatum, Bowe dropped back a few places with fading brakes. John Mote in his Buick K2 held his own starting and finishing 11th. Jon LeCarner had a good race in his K2 moving from 21st to 16th. Bernard Dervieux put on a show in J2-1513 (one of the first J2’s built) demonstrating the finer points of Sydney’s divided axle front suspension finishing 26th.

Sunday’s afternoon race was another thriller. While two of the race’s nine laps were run under a full-course yellow, drivers and fans were treated to a tight contest among the five leaders – the Allard J2X against four California specials; the Parkinson Jaguar Special, a Chevy-powered Austin Healey, a Kurtis Dodge, and the Streets Manning Special.

John Bowe of Melbourne Australia was first to take the checkered flag at the wheel of Joe Calleja’s Allard J2X-3146. This is the very same ex-Carroll Shelby Allard that has been a familiar sight at Laguna Seca for the past 20+ years at the hands of Peter Booth and Augie Grassis. Joe has been working diligently to bring this Allard into FIA specs, with plans to race it in Europe and Australia in 2020. Driver John Bowe has some previous racing history in Australia having won the infamous Bathurst 1000 twice; needless to say, Shelby’s old J2X was in good hands. The J2X had a close race with the Parkinson Jaguar, but in the end the John Bowe made it to the checkered flag first – another Allard victory!

John LeCarner finished in 15th spot with his Cad-powered K2, and Bernard Dervieux’s J2 crossed the finish line in 23rd place. John Mote ran strong until lap 5, when his oil pressure gauge suggested that he prudently ‘call it a day’. All three cars will be undergoing refurbishment over the next year and we hope to see them back on track in 2020.

The Allards were pitted among a wide array of cars of similar vintage. Foremost in this group were a number of California-engineered built by names like Hagemann, Tatum, Baldwin, and Kurtis – cars that were not only fast, but quite able to hold their own on road courses against the sophisticated cars from post-war Europe. One could argue that many of the California Specials owe their existence to the production hot rods built by Allard.

The cars of Group 1B have adopted the moniker, Del Monte Trophy Race Group – cars that either raced in the Pebble Beach Road Races in the early ‘50’s, or would have been eligible to have raced there.

The entrance to this paddock area is fittingly decorated with rows of snow fencing and hay bales which were deemed to serve as protection for spectators back in the day, along with several historic black and white race photos from the early ‘50’s.

This provided an ideal setting for a gathering after Friday afternoon’s practice, with all 38 cars from Group 1B on display. A more casual affair was held Sunday afternoon where the Del Monte Trophy was awarded to Tim Barnes (over 2L) and his 1951 Jaguar XK120 and to Kaiden Marouf (under 2L) and his 1951 supercharged MG TD.

Monterey’s ‘Car Week’ formally starts with Thursday’s Pebble Beach Tour d’Elegance, when more than a hundred rare and elegant competitors in Sunday’s Pebble Beach Concours d’Elegance embark on a 70-mile tour on public roads around the Monterey area. This provides a unique opportunity for the general public to witness these show cars mix with Highway 1 traffic down to Big Sur, before returning to gather for along Carmel’s Ocean Avenue for lunch.

We again welcomed the opportunity to join Martin Allard in his biscuit-colored Allard K3 as we enjoyed the show cars along Highway 1. A part of this included a special surprise to see Ted Springstead at the wheel of his green Allard K3. Ted was one of the thirty Concours entrants to participate in the ten-day, 1500-mile Pebble Beach Motoring Classic run from Kirkland Washington to Pebble Beach. Aside from a minor fender-bender along the way, it was a great and memorable trip.

Three Allards were ‘on the block’ at two of the six (yes – 6!) auctions underway during Monterey’s Car Week. The Carroll Shelby J2 from his 1952 racing season was for sale at Mecum’s, and two Allards were consigned to Goodings. One was the red, Chrysler-powered J2X LeMans veteran of the Pebble Beach and Golden Gate races in the early ‘50’s, and the other was a very nice black K2. Neither the J2 nor the J2X LM made their reserve, while K2 was sold for a very reasonable $84,000.

We’re looking forward to 2020 which will celebrate the 70th anniversary of the Pebble Beach Road Races. We hope to see you there!

View the video of the race at https://youtu.be/d9LvvPR10rc