No.10 in our series of cars and drivers.

This 1950 MGTD Von Neuman Special was purchased early in 1950 by John Von Neuman.  Immediately the wood was removed from the body tub and replaced with electrical conduit tubing.  The fenders, hood, gas tank, doors, front and rear valances were replaced with aluminum.  The body was sectioned including the radiator and grill.  The body was then dropped over the frame like an American hot rod lowboy.  All the special body work was done by Emil Deidt, famous Southern California auto body builder.   After a ton of work on every aspect …  the car was now ready to be entered into the first Pebble Beach Road Race in 1950.  John Von Neuman drove it to victory in the

The MG TD in the paddock with the Del Monte Trophy Race Group 1B at the Rolex Monterey Motorsport Reunion 2019It went on to win the Palm Springs race, Torrey Pines, Sandburg Hill Climb, and Carrell Speedway.  In 1950 – 1951 it entered 14 races and won 7.  Many changes were made to the car to make it more competitive between each race.  In 1952 it was sold to Tracy Bird and Bunpy Bell.  They won a number of races with it and eventually sold it back to John.  Josie Von Neuman then drove it to many wins in the ladies races.    Al Moss bought the car from the John in the mid 1980’s and returned it to race configuration.  He raced it for several years and then had Don Martine drive it for him.  In 1989 Al sold the car to Don Martine who raced it in vintage races at Sears Point, Coronado, Lime Rock, Watkins, Mid Ohio, then at Elhart Lake.  It won the race class at Santa Barbara Concours.  It has appeared at the Pebble Beach Concours twice.  In 2005 it won the Rolex Award for Best Performance and Presentation at the Monterey Historics Road Races.

In 2012 it won the Award for Best Performance and Presentation at the Sonoma Historics Road Races.

Jeffrey Abramson purchased the 1950 MG TD von Neumann Special from Don Martine in 2019 and raced it with us, the Del Monte Trophy Race Group 1B,  at this year’s Rolex Monterey Motorsport Reunion (image, right) 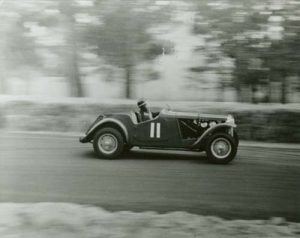 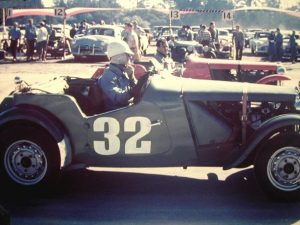 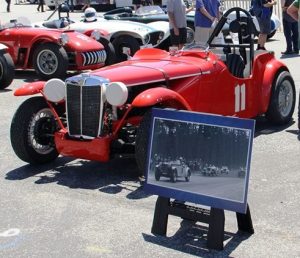 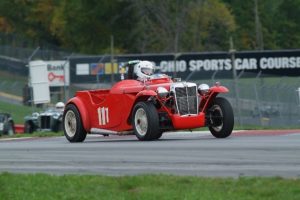 For further information about John von Neumann we refer readers to the article in Love for Porsche at https://www.loveforporsche.com/john-von-neumann-2/