My understanding is that prior owner, Mr. Ken Haller of Reno had driven the car to Reno from New York in the 1950’s. He was active in the Reno SCCA as a participant in rally’s and gymkhana’s. According to Reno British Car (and Merle Brennan’s) mechanic, Ray Craft, Ken Haller had an incident driving home from a party at British Motors on S. Virginia St. in which the 120 was gently turned over in a ditch….not even breaking the windshield!!

My part starts in 1975 when I saw the 120 at Craft Foreign Motors shop where I was having some service done to my TR3. I was infatuated with the car, though thinking it was a Bentley or Rolls Royce sportscar. Ray Craft told me about Jaguar XK120 history in general. A few month’s later there was ad in local paper for an XK120 for sale. Indeed, it was the same car I saw at Ray’s shop. I convinced my boss Bob, (I was salesman at local Honda Motorbike dealership) to come up with half the money….which was good, but I still needed my half……which I borrowed from Christi (Bob’s daughter). The plan was to re-sell in Harrah’s Swap Meet for a nice profit. Car did not sell…Then everything changed when I was a spectator at the Monterey Historic Automobile Races in August 1977. This shot to the surface my simmering romantic idea of somehow being a “gentleman race driver”….like in the decades prior to, and just after, WWII. It became my mission to race the car. After paying off my boss and his daughter, I started the preparation work in order to make the Jaguar race worthy. Initially it never occurred to me to trailer the car to race events….lack of resources was one reason, but also it seemed that driving the car as transport to and from the race events was just the “proper way to do it”. After all, isn’t that how it was done…….back in the day?

The 120 has raced at Riverside, Westwood BC, Palm Springs, Portland, Seattle, and many events at Laguna Seca and Sonoma. This 120 Jaguar has approximately 130 race events in the logbooks…. although, not without some drama over the years. I have almost always been able to drive the car home to Reno. At this point, my intention is to carry on. 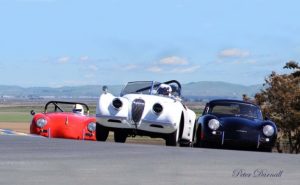 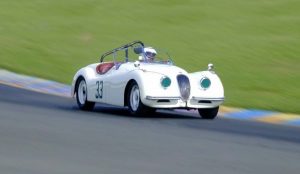