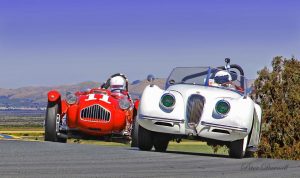 In the halcyon days of the early 1950s, you could go to a sports car race and watch real cars race on real roads—places like Golden Gate Park and Pebble Beach reintroduced European style road racing to Americans.

Close roads to ordinary traffic, put a few hay bales on corners, wave a green flag and the race would be on. And they raced on airport venues too. Airplanes had the right of way, of course. Racing would be stopped to allow scheduled flights to use the runways. It worked fine.

We stood beside the road and cheered as sleek Jaguars and Allards roared past at unbelievable speeds. The exotic smell of burning rubber and Castrol R motor oil hung in the air. Spectators were asked not to cross the track during events—there were no concrete barriers or safety fencing in those days.

And that, my friends, was road racing before the insurance companies and attorneys had their way.

Peter Darnall is a photographer, historic race car writer and fervent supporter of the Del Monte Trophy Race Group. He’s a fifth generation Californian and traces his roots to Berkeley and to the community of Ocean View which preceded it. He is now retired, married and living in Sacramento. On his love of writing about and photographing great racing cars from a bygone era, Peter says “My life seems to have come a full circle as I race to the finish line: I started out intending to be an automotive journalist and spent several years demonstrating that one couldn’t make a living in this esoteric venue. The financial arena was more promising: half a century—and two companies—later, I retired. Hoping to delay the onset of age-related dementia, I returned to my original efforts as a free-lance journalist and photographer. Years of benign neglect and good wine had taken a toll, but the creative side of my brain is staging a comeback.”