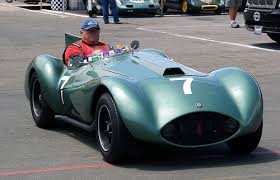 Rod Nuckey was a young English driver whose family owned the Warrior Tap & Die Company in Hertfordshire. In 1953 he acquired a Cooper-Bristol Formula 2 Mark II, chassis CB Mk23153. Nuckey won several races during 1953, in the Cooper racing for Ecurie Richmond. However at the final Snetterton meeting of the year the car was seriously crashed, ruining the chassis. The engine and transmission were removed from the Cooper and used in a new car to be run in sports car races.

The new car was known as the Warrior-Bristol. Its designer, Bernard “Bernie” Roger, was a talented 35 year old engineer who designed and built a number of one off specials in the 1950’s. The Warrior is believed to be his first from the ground up. Roger had spent his early years apprenticed with Alta Car and Engineering Company. He later became chief mechanic for Mike Hawthorn in 1952 and Ecurie Richmond in 1953 working primarily on Cooper MkI and MkII f 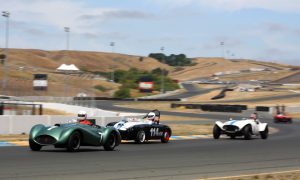 ormula 2 cars. In 1953 he designed and built the first Cooper-Bristol sports car, utilizing the Alan Brown Cooper Mk I chassis with a Ferrari Barchetta style body by Wakefield’s of Byfleet. It had a De-Dion suspension and preceded Cooper’s own prototype Cooper-Bristol sport car by several months. Roger was later associated with Francis Beart, constructing the Beart-Roger sports racer in 1956. Later Roger was connected with the design of the Peerless GT and the ill-fated Gordon Keeble. 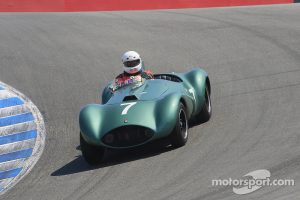 As Rod Nuckey wanted a sports racer, Bernie Roger obliged by creating the Warrior-Bristol with an entirely new chassis, of the tube frame Superlegerra type. It was similar in many respects to the H-frame tube chassis built by John Tojeiro in 1953 for Cliff Davis. The Tojeiro chassis eventually became the basis for the A.C. Ace. However the Roger design utilized a De-Dion rear suspension with torsion bars, a lighter tube frame and Cooper 4-lug wheels. It was bodied by Williams and Pritchard of North London who also developed similar bodies for the Tony Crook-Jack Walton ex-Cooper MkII and the Bristol 450 sports racers. Originally the front suspension utilized a transverse leaf spring. However it was soon changed to torsion bars. The head faring and wrap around screen were added in 1955. The car was registered SAR 336. 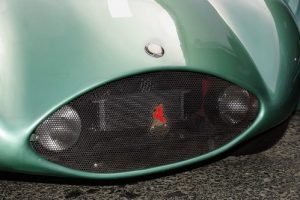 The Warrior was raced extensively in 1954 and 1955 by Nuckey, Roger Biss and J.D. Lomas at Silverstone, Crystal Palace, Aintree and Snetterton. At the 9th British Grand Prix for sports cars in 1954 the car was driven by Nuckey to 9th place overall, third in the 2 liter class. He placed behind such drivers as Peter Collins (Aston Martin), Roy Salvadori (Aston Martin), Carol Shelby (Aston Martin), Reg Parnell (Lagonda) and Archie Scott-Brown (Lister Bristol). 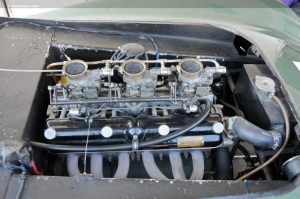 Arnold set a course record for 2 liter cars at a sprint meeting in Malaysia. The car was still being raced by Arnold in 1960 when he took 1st place overall at the Johore Coronation Grand Prix. The car was registered NA3.

At one point Arnold powered the car with a Jaguar 2.4 liter engine following the demise of the original Bristol. This particular motor was an experimental motor which had disappeared from Jaguar’s shops years prior. In that form it won the sports car event at the 1970 Singapore Grand Prix driven by Tim Robertson. 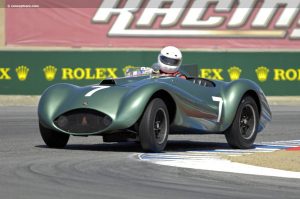 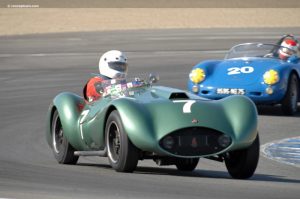 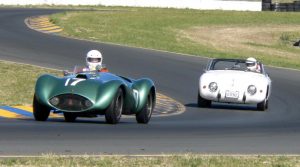 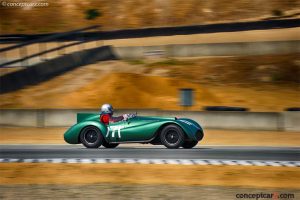 The driver today… Jack Perkins is a retired Barrister/Solicitor who has been involved in vintage racing since 1993.

“I was a “car guy” since even before my high school days, and enjoy the chance to “wrench” on my own car projects. My first project was transplanting an early Chrysler “hemi” into my 1952 Ford. I currently own and race the Warrior, a 1958 AC Ace-Bristol and an Alfa Romeo GTA. My other collectable cars include a 1949 Bristol 401, a 1930 Packard Phaeton, A 1932 Packard Club Sedan, a 1997 Jaguar XK8 and a 1997 Toyota Supra Twin-Turbo.” 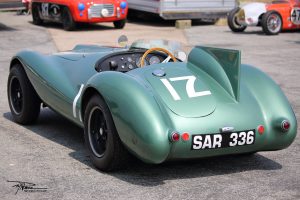 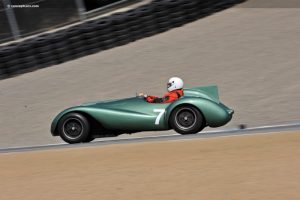