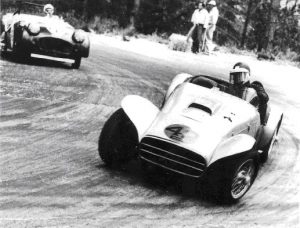 “Hello, I see the Huffaker Marston Healey Special was part of your earlier photo shoot, is that car going to be displayed this weekend? It was built by my father, Mick (ok, he watched Joe do all the work!) and Joe Huffaker and we might make the trip down to see it if it’s there. I’ve read thru the pages, but am not sure.
Thank you,

Dear Scott, Your dad’s Healey Special was sadly not entered with the Del Monte Trophy Race Group at this year’s Reunion . It did participate in May in an extensive video shoot on the roads of the Pebble Beach circuit. The filming was organised as part of the celebration of the 70th Anniversary of the Pebble Beach Road Races and Concours d’Elegance.  It was shown repeatedly during Sunday’s Concours.

The Marston Healey Special competed in the 1956 Pebble Beach Road Races and was, as you know, we’ll driven by your dad.  We were able to get its current owner to include it in the Special Exhibit of “California Specials That Raced At Pebble Beach” at the 2017 Concours d’Elegance.  We are hoping that it will join the Del Monte Trophy Race Group on the track for next year’s Historics.  It’s owner, and soon to be neighbor, has always been a hot shoe!  Best, Rob Manson

Sent from my iPad