The McDonald Healey was first raced in Reno in 1953 making it one of the earliest Healeys off the production line, the 2nd known “big Healey” to race in the US, and a race car from new. After racing the first few years in NorCal (Pebble, Golden Gate, Stockton, etc) it was converted to Chevy power in 1955/1956 when the new Corvette V8 was released. 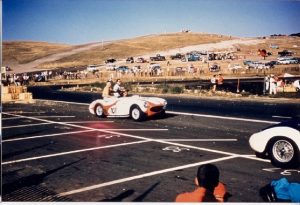 Bourgeault, a master fabricator in aluminum and well known for the Bourgeault Formula race cars. The new body was never completely finished and remained with another Oakland collector until about 2000. In 2005 and 2013 it was campaigned at the Coronado Speed Festival and after a complete sorting has made appearances at the Monterey Historics since 2016 with the current owner Gary Cox.

Previous owners:
* William McDonald – San Mateo, Ca (married heir to the Marshall Fields chain): First owner. Took 4th and 6th at Reno, 1953 with Healey power. Took 2nd in class and 19th overall at Pebble in 1954. Banned from SCCA racing for on track behavior in 1957.
* Stan Peterson – Oakland, Ca: Bill’s good friend who took over driving duties of the Healey Chevy. Took 3rd in CM at Cotati in 1957 and a 6th and 4th at Paramount also in 1957. Stan was a highly skilled driver and when he wasn’t driving his own entries, over the years was noted to pilot Ferrari, Maserati, Jaguar, Lotus, Alfa as well as numerous Formula cars including F1. He won his race in the Bahamas against the famous drivers of the day, campaigned in many hill climbs, and has a long list of accomplishments in Racing Sports Cars. 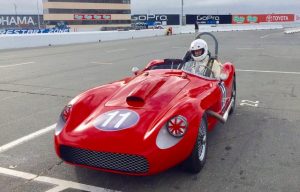 * John Lipscumb – Oakland: John was a serious Healey collector who had his shop down the street from Stan’s in Oakland. According to his son, Sr acquired the Special sometime in the 70’s/80’s and stored it with approximately 100 other cars until finally selling it to Bruce Glascock around 2001. John Jr, recognized the car in the paddock in 2018 which help put its history together.
* Bruce Glascock: Was a racer and long time owner of Specials who eventually was able to pry the car from Lipscumb’s deep storage. After doing a superficial refresh, he entered the car in the 2005 Coronado race where it dnf. The Healey Chevy never made it home….it sold from the paddock. Later Bruce would tell me “it was the most terrifying car” he had ever driven.
* Wes Abendroth/ Doug Brower – Reno, Nev: Wes is a long time and well known racer and owner of “Specials” with quite a collection. Purchased by Wes in 2005 for his friend, Doug took it to a few shows and raced it once, again in Coronado, in 2013. Not surprisingly, it was again put back on the market in 2014 until the current owner bought it in 2015 in essentially as run in 2005. 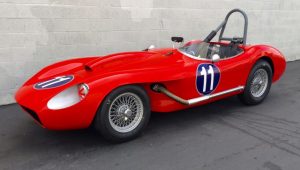 * Gary Cox – Newport Beach,Ca: I started west coast club racing in 2000 first in Mercedes (1955 190SLR) and then with BMW 2002’s. In 2013 I bought my first big bore car, the Blackjack Jaguar Special that was built in 1958 and quite historic. After sorting the Jaguar, it became a solid competitor until I sold it in 2015 when I retired from racing. That lasted just a few months until I couldn’t resist the Healey Special. After fully sorting this car, it is now a wonderful neutral driver, very reliable, and can compete in the front of its run groups.

Further information on the car from its auction prospectus (yes, you guessed it, Gary has sold the car and it will be going to the East Coast. Adieu, Healey Special):

This 1953 Austin-Healey 100 is a left-hand-drive example that was built on August 28, 1953 and delivered new to William McDonald in Northern California. Based on the seller’s research, the car was initially campaigned in the D Production class until being fitted with a Chevrolet small block in 1956. It subsequently raced in C Modified events driven by McDonald and Stan Peterson through its last entry at Vaca Valley in 1958. The car was then stored for many years before being refurbished by a previous owner in 2002 and acquired by the seller in 2015. Approximately 15 hours of use have since been logged, including three Rolex Monterey Motorsports Reunion races at Laguna Seca, as well as SVRA and VARA events at Sonoma and Buttonwillow. The 283ci Chevrolet V8, Borg Warner T-10 4-speed manual transmission, and BN2 differential were rebuilt in 2017, and the car was more recently prepped for participation in the upcoming 2019 Monterey Historics. This Healey racer is now being offered for sale with SVRA and HMSA logbooks, a spare engine, several other parts, a dyno sheet, a BMIHT certificate, parts receipts, period race photos, and a clean California title in the seller’s name.
Originally finished in Healey Grey, the body was repainted in red circa 2002. Historic photos also show the car finished in yellow, white, and orange at different periods in its life, as well as with various iterations of modified front bodywork. The current front-end treatment was reportedly inspired by a Ferrari 250 TR driven by Stan Peterson and is thought to have been built by alloy craftsman Nade Borgeault. The seller installed an aluminum hood with a scoop and also modified the nose, front headlight buckets, and door panels. 15” MWS wire wheels are equipped with two-eared knock-off spinners and are wrapped in Dunlop L204 tires. The braking system features early-style front discs, stock rear drums, and a Tilton adjustable pedal assembly.The car has participated in a number of Rolex Monterey Motorsports Reunions during the seller’s ownership, and it will be competing at the 2019 event in the 1947-1955 Sports Racing class. The cabin is equipped with fixed-back seats that have been relocated rearwards and feature a racing harness for the driver. An integrated roll cage has been installed along with a fire-suppression system, including an extinguisher mounted in the passenger footwell. A wood-rimmed Moto-Lita steering wheel is mounted on a quick-release hub, and an aluminum dash houses an array of Stewart Warner gauges and an engine cutoff switch. A Super Pro tachometer has been added above the steering column. An ATL fuel cell is mounted in the trunk as shown above, and the integrated cage is also visible. The 283ci Chevy V8 was rebuilt in 2017 and features double-hump cylinder heads, a COMP Cams camshaft, 4-into-1 headers, and triple Rochester 2G carburetors on an Offenhauser manifold. The Pertronix ignition system is said to include a recurved distributor. The Borg Warner T-10 4-speed manual transmission and BN2 3.90:1 rear differential were also rebuilt in 2017. A spare 265ci Chevy V8 and T-10 transmission are included in the sale, along with an extra set of wire wheels and other parts outlined in the gallery below. Suspension components include BN2 spindles, rebuilt lever shocks, adjustable camber plates, a Panhard bar, and replacement rear leaf springs and bushings. Replacement floors were also installed by the seller, and additional photos of the underbody, suspension, and brakes can be seen in the gallery, along with a build list. A number of period photos are included showing earlier paint schemes and bodywork configurations. In-process photos of the exterior alterations performed during the seller’s ownership are also attached in the gallery.