In the mid-1950s, sports car racing took America by storm. Almost every weekend at tracks around the country, both professional and gentleman drivers could be found pushing their machines to the limits, all for a chance to stand atop the podium. So often, these race cars were driven hard, put away wet, damaged in accidents, and often modified for the sake of performance, as their drivers sought to extract just one more race behind the wheel. It was extremely rare for a racing car to enter the crucible of motorsport and leave unscathed and unmolested.

It was even rarer for one of these racing cars to be retained by its racing driver after it retired from competition. Furthermore, it is almost unfathomable that one of these drivers would hold onto their cherished racer for the next 60 years. Yet, such is the story of this Ferrari 750 Monza. 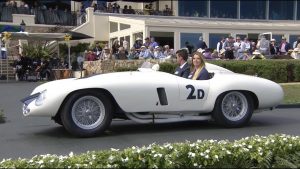 Chassis 0510 M was sold new to Allen Guiberson of Dallas, Texas, a manufacturer of drilling and refinery equipment, who owned and campaigned several early Ferraris. The car was finished in a distinctive color combination of white with a dark blue triangle, stretching from the car’s nose to its windshield, and mimicked on the tail. The 750 Monza would retain this distinctive color scheme for the 1955 season, where it would see great success at the hands of some of motor racing’s great drivers.

The first event for the new 750 Monza was the 12 Hours of Sebring in 1955. With Phil Hill and Carroll Shelby behind the wheel under race #25, the Monza was initially crowned the overall winner at the end of a hard-fought 12 hours against the Jaguar D-Type of Mike Hawthorn and Phil Walters that was entered by Briggs Cunningham. Both teams argued that their car had crossed the line first. Upon a final review of the lap charts, well after the race, the Jaguar was declared to be the winner. It had crossed the line just 25.4 seconds ahead of Guiberson’s Ferrari, an incredibly slim margin over the course of just 12 hours. However, Hill and Shelby still managed to clinch the Index of Performance trophy. 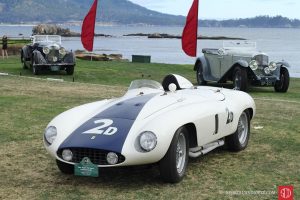 The car’s next outing with Phil Hill would be more fruitful. Chassis number 0510 M raced to a hard-fought 1st place finish for the Del Monte Trophy at the Pebble Beach road races in April. The car’s third and final event for the season was at Palm Springs on 3 December, where it finished in 2nd with Phil Hill behind the wheel yet again. This would be the final event for the car under Guiberson’s name. At the end of the season, it was sold to Richard “Dick” Hall and his brother, Jim. Perhaps they did not know it at the time, but the Ferrari would remain in the hands of the Hall family, only the car’s second owners, for an incredible 60 years.

FURTHER SUCCESS WITH HALL AND SHELBY

Chassis number 0510 M would find its way back to Pebble Beach for the first event of the 1956 season with Carroll Shelby behind the wheel, repeating its overall victory from 1955. The next week, Shelby and the 750 Monza travelled to Dodge City, Kansas, where they took first place yet again. Chassis number 0510 M would rack up 1st place finishes at Eagle Mountain, Texas, with Carroll Shelby and Fort Sumner, New Mexico, that year.

Fort Sumner would be the very first time that Jim Hall drove the Monza, and he recalled it as being a hard-fought battle. Not only would this be Hall’s first race in the car, but it was his very first win. Finishing in 1st place against the Porsche 550 Spyder driven by Jack McAfee, who was that year’s SCCA National Champion and is considered to be one of the SCCA’s greatest drivers, this was a clear highlight in what would become a very successful motorsport career for Jim Hall.

In a recent conversation with RM Sotheby’s Research & Editorial department, he commented, “I remember driving it for the first time and was amazed by it. It had lots of torque and you had to shift through the gears quickly, but it had lots of go. The brakes were fantastic, even though they were drums. I thought it was a fabulous race car.”

During the race in Dodge City, the car’s engine had picked up some debris on the track and the car was subsequently shipped to Maranello to be serviced. In addition to the engine service, the factory fitted chassis number 0510 M with a door on the left-hand side and a full-width windscreen in order to conform to FIA Index C regulations. It was refinished in red by the factory prior to being shipped back to Jim Hall, where it would resume racing.

Purchased outright from his brother prior to the 1957 season, Jim Hall continued to campaign the Monza. The car was raced in a handful of sports car races, mainly in Hall’s home state of Texas. Hall raced his Ferrari in at least one event in 1958, finishing 3rd overall and 2nd in class at the Mansfield Spring Sports Car Races in Louisiana.

Following its retirement from racing, the car remained in storage with Jim Hall for nearly 40 years, preserving its unmolested condition at a time when other Ferraris of similar ilk were often modified and upgraded in pursuit of continued racing careers. No such fate would await 0510 M. In the mid-1990s, Hall decided that his 750 Monza should be restored to its former glory and entrusted it to Troy Rogers, former chief mechanic for the Chaparral racing team. At this time, the engine’s bell housing and starter were replaced, but all of its other mechanical components were retained.

Finished in its recognizable blue and white livery, Hall’s 750 Monza was first displayed at the Monterey Historics in 1997 as part of a tribute to Carroll Shelby. Following its initial appearance at Monterey, it was shown at the 2005 Pebble Beach Concours d’Elegance as part of a special display of cars honoring Phil Hill and Stirling Moss. In 2011, it was part of an exhibit honoring Phil Hill at the Petersen Automotive Museum in Los Angeles.

Since then, the car remained well-preserved in Jim Hall’s care in his native Texas. After its restoration, it would be started occasionally and gently driven around Hall’s test track to make sure that everything was in running order. Prior to the passing of both Carroll Shelby and Phil Hill, Jim Hall had both Shelby and Hill draft letters detailing their experiences with 0510 M.

The provenance and importance of chassis number 0510 M is irrefutable and second to none. Following a highly successful racing career with three of America’s greatest drivers, its careful preservation, restoration, and custodianship, in the hands of Jim Hall (one of those very drivers) for over 60 years, has put it in a class of its own. While many four-cylinder Ferrari sports racers fell to the crucible of motorsport or general neglect following their racing careers, this particular 750 Monza persevered and remains today as perhaps the finest example in existence.