Delivered in Beverly Hills, California this 1951 Allard has had several lives.  The name of the original purchaser is unknown, but after a few years of ownership the car was sold to a new owner who drag raced the car in California.  Ordered to accommodate a Desoto Firedome Hemi V8, the dealer instead installed a Cadillac 331 V8 with a LaSalle 3 speed transmission.

George Myers of La Crescenta, California purchased the car in 1960, and owned it 49 years until his death in 2009.  He restored the car to original condition and showed it at a number of concours and car shows in Southern California where it won a number of awards.  In the early 1980’s George decided to road race the car and installed all of the required safety modifications.  The car was raced at most tracks in California and on the West Coast including Long Beach, Riverside, Coronado, Willow Springs, and Monterey.

After wearing out the original Cadillac 331, and then throwing a rod in a second 331, George elected to install a Chevy 350 small block making about 300 hp.  He coupled that to a T-10 4 speed transmission, and a Ford 9” rear end, replacing the trouble prone and weak 1946 Ford rear end.  The drum brakes were upgraded to larger drums from a 1960’s Ford pickup truck.

George raced the car in this configuration until he became ill in 2007.  His son, John Wilkins raced the car with VARA for a few seasons and then parked it after his father passed away in 2009.

Doug Klink of Estes Park, Colorado purchased the car in 2015 and performed a mechanical freshening of all the car’s systems.  The original patina has been preserved and the car has raced at tracks on the West Coast and in Colorado and Oklahoma. 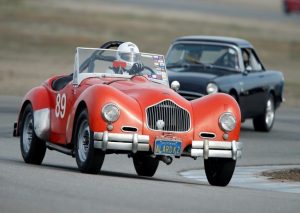