GONE… we’re so sad. Don sold the Aardvark to a buyer in France so we are unlikely to see the car again unless the new owner brings it stateside. Don endeared huimself to us by bringing several spare engines and popping a new one in during his tea break. Don also drove the 1952 Streets Manning Special for a season in the late nineties or mid noughties. (note from Rob Manson and Marcus Bicknell, January 2019)

This ‘street/racer” was hand built in Southern California during ’51 & ’52 on a Dyna Panhard chassis  that John Porter had purchased with the intention of “Americanizing” it to be used on the local sports car circuits.  Dean Banks, a noted Newport Beach, California sportsman, assisted.   All the mechanical components are from a “Panhard Junior” while the body is built of hand rolled aluminum with a fiberglass nose panel.

The Aardvark is a front engine, front wheel drive car that weighs less than a 1,000 pounds with the entire engine and transaxle in front of the front wheels.  The engine is a Panhard 850cc, opposed flat 2 cylinder with a roller bearing crankshaft and “torsion bar” valve springs.  This is the engine that powered many of the “Index of Performance” winners at LeMans for many years! When completed, Porter named it the Aardvark.  Not only does it have the long snout as the real nocturnal animal but the name itself would insure he was at least listed first in all the programs.

The car competed in the very popular “H-Mod” class and ran extensively throughout California including Pomona, Torrey Pines, Paramount Ranch, Golden Gate park, Riverside, etc. until 1966 when it disappeared.  It was rumored to be in Florida for a few years, but was discovered abandoned in a field in southern California where it was said to have been for the previous 10 years.  The car was restored 20+ years ago by its present owner to as close to as possible the original intent = “A little Aardvark never hurt anyone”! 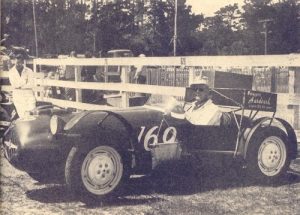 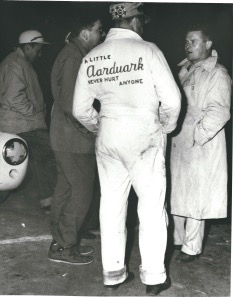 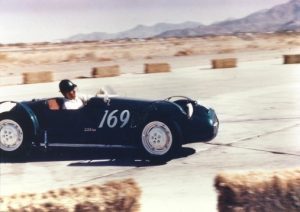 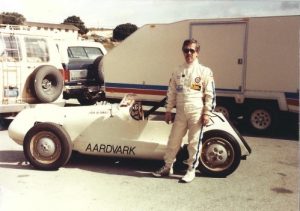 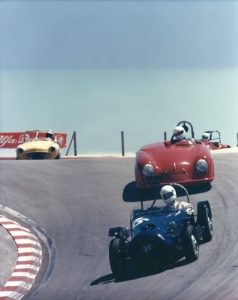