The 70th Anniversary celebration of the Pebble Beach Road Races and Concours d’Elegance kicked off with a press conference in the Concours Village before the start of the annual Tour d’Elegance.  The backdrop was all 5 of the Pebble Beach Road Races winners positioned in front of our 50 foot Celebration Display.  Sandra Button, CEO of the Concours opened this year’s event.  Derek Hill, Phil’s son, moderated and spoke of his father’s recollections of the inaugural 1950 race and his win in the Jaguar XK-120.  Robert Devlin, motorsport historian, continued with details about the Pollack Allard J2 (’51, 52), Hill Ferrari 250 MM (’53), Edwards Ferrari 375 MM (’54), and the Hill and Shelby Ferrari 750 Monza (’55,’56) as well as commentary on the historical importance of those early road races.

We created two sets of Celebration Displays, the first for the Concours d’Elegance.  The second was located in the Rolex Monterey Historic Reunion exhibit area at Laguna Seca.  The Pebble Beach Road Races winners were on display in front of it on Saturday. They did a few demonstration laps at the lunch break and riding in the #14 Allard was driver Bill Pollack’s daughter Mellette.

Our Paddock Rows J and I were again a rolling museum exhibit of early 1950’s motorsports history in California. We displayed a late 1940’s Kurtis Kraft Midget, the dominant local oval track attraction during and immediately after WWII.  Also the Baldwin Payne Special, one of the first hot rods built as a sports car in the late 1940’s for Southern California drag races, hill climbs and speed events, prior to the first road races in 1950.  We had an extraordinary display of our early 1950’s imported and domestic sports cars.  The two-time Pebble Beach winning Ferrari sports racer and the Devin Chevrolet Special closed our era in period, and demonstrated where the sport would be headed.

Our Race Group 4A track sessions were well fought, exciting racing.  Pollack, Hill or Shelby didn’t drive those cars any harder when they were new than we drove them last weekend, 70 years later! All that great racing in a respectful, no contact experience: that’s what fun on a race track in a great old car is all about.  The track announcers were very well informed this year and demonstrated their skill and interest in our cars in each of the 4 sessions. These were also live streamed over the internet and followed closely by our many friends and fans who couldn’t attend this year.  While the live stream commentators were ill informed and apparently uninterested, the track announcers can be heard in the background. You can still watch it at (https://www.youtube.com/watch?v=0M40SjhDf74 and race 2 starts at about 6 hours 22 minutes in) 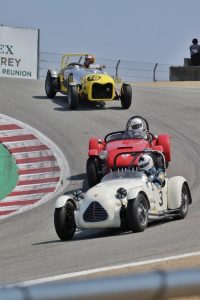 Our web site also carries pieces on the Huffaker Healey, the descendants of the original Pebble Beach drivers, the 1955 Ferrari 750 Monza Scaglietti Spyder, the article on us in Victory Lane, and the 1956 Cleary Crosley Special, all available by scrolling down http://www.dmtrg.com/category/news/

There were daily posting on each of the cars and drivers in Race Group 4A on our FaceBook page (https://www.facebook.com/MontereySportsCarRoadRacers)  prior to Thursday the 12th.  Also posted are many glorious photos taken during the event by Colin Warnes, our illustrious DMTRG photographer, David Gentry and others.  You might want to check yours out.

We issued 3 Press Releases and others were sent out by the Concours and Reunion press staff. We’ll put together a folder of those and the articles in online and print magazines that they produced. 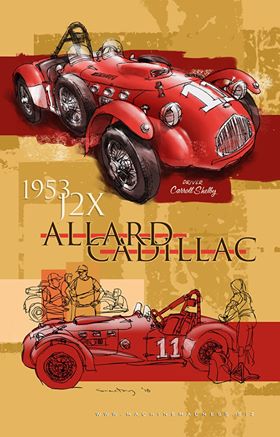 David Gentry is the artist who did the original artwork of several of our cars, the graphics and the composition of the 70th Celebration Displays, the Rows J and I Information panels and, of course, our Del Monte Trophy Race Group logo.  He is as passionate about our cars and the stories that they tell as we are.  He volunteered his talent and time to create a wonderful presentation for us and for spectators at both the Concours and the Historics..  His web site is www.machinemadness.biz. Please visit it to see more of the extraordinary motorsports art that he creates.  Your car may be there, and if it isn’t ,you may want to commission him to do it.

Our fellow DMTRG Allard racer Jon LeCarner, whose company TotalExpo, Inc. specializes in convention exhibits, did the production and provided the structure for all of the displays.  Their web site is:  www.totalexpo.com 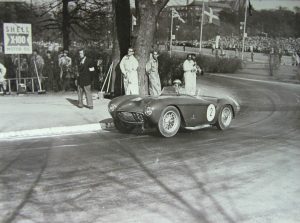 The black and white period photos that we have been privileged to use in the displays and throughout the pits are used by permission of the Julian P. Graham, Pebble Beach Company/ Lagorio Achives.

Each year, at our Del Monte Trophy Race Group gathering, we honor two of our group who have raced and finished; one in the Under 2000cc and one in the Over 2000cc Classes.  Two previous honorees choose this year’s winner.  On our behalf Gregor Magnusson and Kaiden Marouf chose Robert Davis and his Siata 208S as this year’s  Under 2000cc honoree and   John Buddenbaum and James Heth, standing in for Tim Barnes, chose Rob Manson for Over 2000 cc. Their names will be added to the perpetual Del Monte Trophy along with the past winners going back in each Class to 1950.  Congratulations to the honorees and to the selectors!

The Del Monte Trophy Race Group Logo cloth patch should have been received by everyone in Race Group 4A and hopefully is now firmly attached to your race suits.  But…There’s more swag for anyone looking for birthday or Christmas or just everyday stuff with our logo on it.   Any profits are for the DMTRG Project.  Go to:   https://www.redbubble.com/shop/ap/84120896

•    Thanks go to everyone in the Race Group for the hard, clean racing and for making this 2021 Historics so much fun.
•    A special shout out goes to Marcus Bicknell in Chalfont St Giles, England, David Gentry in San Francisco and Jon LeCarner in Placencia.  We couldn’t have accomplished all of this year’s projects without their dedicated efforts.
•    Thanks also go out to; Dave Nelson and his initiative to create a cinema house in the bright sunlight of a race track parking lot (“Racing Through The Forrest” has to be one of the only car movies you could want to see twice);
•    to Bill Rooklidge who created the Phil Hill Award for the Jaguar XK-120 that is first to finish (and isn’t the Parkinson).
•    and to Colin Warnes, DMTRG photographer and all around Allard resource.

All the Best, Rob Manson