Acceptance letters are out and we’re again group 2a … Saturday. There will be some added and some dropped out … such is the process.

We want to name our row … any ideas? 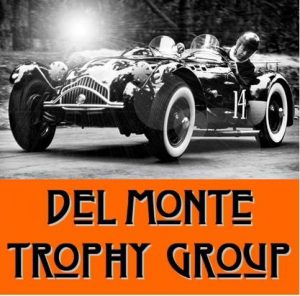 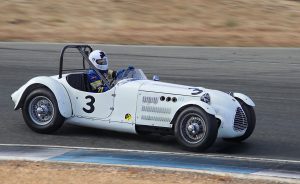 The Parkinson Jaguar Special, now there’s a real sports racing car! Let me share a couple of pictures with you; there’s a bit of a story too. I took this shot (left) of the Parkinson Jaguar Special during the CSRG Season Finale at Thunderhill in November 2017. The car was close; so close I could have stepped into the passenger seat beside John Buddenbaum as he flashed by. These areas were designated “off limits” to the public for safety reasons, but I had photographer’s credentials for the event.

Event programs usually feature in bold print the caveat “Motor Racing is Dangerous.” No argument with the logic; racing automobiles is an unpredictable activity, and no one wants an errant race car ending up in a spectator’s lap. These days, spectators are herded into designated zones and allowed to view the far-off action through a wire mesh safety fence. The cars themselves have become truly bizarre: crash resistant safety cocoons festooned with airfoil devices and tarted up with outlandish paint schemes and corporate paraphernalia.

Thanks, but I prefer the way things were back in those heady days following World War Two, when European style road racing came to the United States. Sports cars like Don Parkinson’s Jaguar Special were created to be used on public roads during the week and raced on weekends. And they raced on real roads, not designer courses with contrived turns, huge run-off areas, and billiard table smooth road surfaces. Spectators were welcome, but no amenities were provided.

Imagine sitting beside the road in Golden Gate Park. It’s Sunday afternoon in late May 1952. You’re in a small group of people on a grassy slope on Middle Drive West at the intersection of Metson Road. Normally the speed limit for automobiles would be 15 mph, but not today: The Guardsmen sponsored

sports car races are on and this intersection is now a hairpin turn at the end of a long straight. The speaker on the makeshift PA System has just announced that Bill Pollack, driving Tom Carsten’s Cadillac Allard, has been timed at almost 140 mph and he’s headed our way.

The black Allard suddenly appears up the road to our left. He’s coming fast, hugging our side of the road. The wheels are stirring up small clouds of dust from the grass and the nose drops sharply as Pollack brakes hard for the hairpin turn. We instinctively pull back a few feet and suddenly the car is right in front of us. We’re almost close enough to read the instruments on the dash as the Allard cuts for the apex of the turn at the intersection. The thunder of the big Cadillac engine makes the ground shake as the Allard accelerates away. The left front fender brushes a hay bale across the road and a bit of straw flies up in the air . . .

Such was my introduction to the sport of road racing! Of course, it was dangerous . . . but that’s not the point. Nobody obsessed on this contingency in those halcyon days.

Don Parkinson was an architect in Southern California. He shared an aspiration to become a race car driver with his brother-in-law, Phil Hill. Unfortunately, Parkinson misjudged the first turn during the Pebble Beach Races in 1951 and smacked a tree with his Jaguar XK120. The badly damaged Jaguar was sent to Roger Barlow’s International Motors in Los Angeles for repairs and rebuilt as a “Special.” The spartan bodywork, with its cycle fenders and subtle curves, was drawn by a teenager named Robert Cumberford. Marvin Faw matched the drawings with sheet aluminum stretched over the modified Jaguar chassis. Richie Ginther reworked the Jaguar engine, enlarging to 3.8 liters. Phil Hill was closely involved with the project from the beginning.

Google it: A record of the names of the men involved with the Parkinson project reads like a “Who’s Who” of the Southern California racing scene; the Parkinson Jaguar Special has a real pedigree. Don Parkinson had considerable success with his Jaguar Special. He took a class win in the feature Guardsmen Trophy event at Golden Gate that first year. He eventually sold the Special for a C-Type Jaguar.

Sports cars would race again in Golden Gate Park the following year. Word of the excitement of racing fast cars on the Park roads had spread and the crowd which showed up was much larger. Workers had spread snow fencing alongside the roads to discourage spectators from crossing the course. The vantage points at the hairpin turn had been fenced off. . . too dangerous they said.

I wish I could say the same. 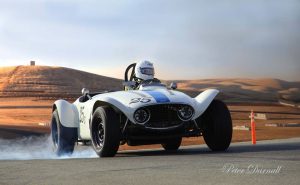 Peter takes glorious photos of our cars and several have been posted on our Facebook page https://www.facebook.com/hotrodroadracers/   The shot of the front right locked up on the Tatum at Thunderhill in November 2017, right, is a favorite of mine.

Would you like to know more about Peter? p_darnall_bio

Following the first appearances, last year, of Rob Manson’s 1949 Baldwin V8 Mercury Special and his 1950 Streets Manning V8 Mercury Special alongside Ernie Nagamatsu’s Old Yeller II at race and hill-climb events in the UK, the tables are turned. UK and European based sports racing and production GT cars from the period 1947 to 1955 are invited to race in the Rolex Monterey Motorsports Reunion at Laguna Seca 16-20 August 2017 and/or to participate in the concurrent Monterey Car Week. Drivers not only get 2 qualifying sessions and 2 races at Laguna Seca, but also the opportunity to get the same amount of track time just one weekend before, at the Historic Pre-Meeting on the same track.

Carmel-Monterey-based Rob Manson is working to ensure that these cars remain a prominent and exciting feature at major vintage car road racing events across the US. The Group’s focus for 2017 is Monterey / Laguna Seca in August. These cars would have competed at the Pebble Beach Sports Car Road Race and other venues held in parks, public roads, airports and military bases when the national series included over 30 events nationally.

2017 is the 60th Anniversary of Laguna Seca Raceway, the permanent track built nearby in response to the public demand created by the Pebble Beach Road Races and the 60th Anniversary of the last of the Pebble Beach Sports Car Road Races. A number of activities will be organized for the Del Monte Trophy Group during the Monterey Car Week in mid-August … emphasizing the cars’ significance to the introduction and popularization of sports car racing in the Western US. We are working with The Pebble Beach Concours d’Elegance and Laguna Seca Raceway in support of these Anniversaries. Our focus regarding this announcement is racers, owners, historians, media, organizers, marque clubs and several event venues.