The car was placed into storage after a September 1989 Sears Point event for 18 years and 4 months. I purchased the car from Kathy and Mike Downs in 2006 and began preparing the car to go racing again. My first event was at Laguna Seca on 3/14/08 for an MG Racers/HMSA Race. I raced 11 times after that first event with CSRG, General Racing and SVRA.

A stroke in 2012 ended my racing and Joe Huffaker Jr. has driven the car 9 times between 2012 and 2016. SVRA has awarded the MG a Gold Medallion Rating as part of it’s program to have owners keep the cars as they raced back in the day. The engine is the original XPEG unit for this car. It is bored .040 over and the stroke is stock. The cylinder head is shaved for a 9 to 1 compression ratio. The carburetors are stock one and one half inch SUs. The manifold for intake and exhaust is a Derrington unit. The cam is a three quarter race unit and the flywheel has been shaved. Ignition is by Mallory dual point with a Lucas coil. A stock 12-volt generator and a stock starter motor are used. The transmission is the original MG TF. The car is licensed for the street by California DMV and is normally driven to the track. 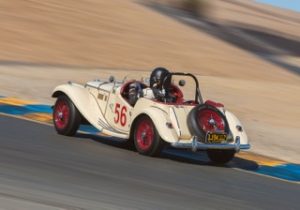