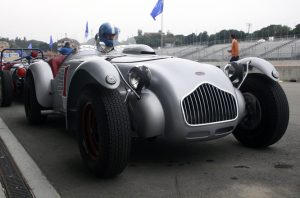 Today’s story begins in the sun fried podunk called Bell on the west side of an arid ditch called Los Angeles River in California, where ‘Okie’ George Wright drifted in 1919 and started a wrecking business that transformed over time to become the world first speed shop called Bells Auto Parts for competitors running Model T’s.

Just before the second world war a lanky redheaded kid called Roy Richter from Maywood California, a perfectionist with a genius for pattern making and fabrication started building a reputation at Cragar, a company owned by George White , manufacturing Leo Goosen designed cylinder heads and at Bell Auto Parts where Roy built his first Saxon midget, then raced it successfully.

Roy moved to Detroit where he continued to manufacture dirt track cars, but in 1938 after a racing tour of New Zealand, Roy settled again in California where he built an extremely successful Offenhauser powered midget for Sam Hanks, the eventual 1957 Indy 500 winner aboard the Belond Exhaust Special.

During the war Roy worked in the aircraft industry and his former employer George Wright of Bell Auto Parts passed away, Roy took the opportunity to lease Bell Auto Parts, raising the money by selling his Model T.

After the war a huge demand for racing equipment was unlocked as hundreds of thousands former forces personnel who had built up an enthusiasm for all things mechanical during the war now had the time and disposable income to explore their curiosity to go faster and further.

Bell Auto Parts took full advantage of it’s position as a distributor of performance parts and diversified with a mail order catalogue. Roy with an eclectic taste in vehicles midgets, desert streamliners and sports cars became the California distributor for Allard cars and imported this vehicle the 3rd J2 built and the 8th ever imported to the USA.

Allard J2 1513 was shipped to the USA without a motor, as was customary, and Roy installed a Cadillac 331 cui V8. 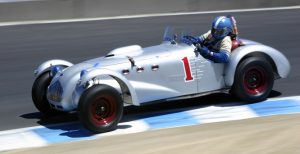 On one occasion when Roy’s wife Colleen was away he took his #1 Allard J2 down to the US Navy airship base at Santa Ana and entered a race with amongst others a couple of XK120’s driven by Phil Hill (#18), and Jack McAfee (last row), Tom Frisbey (#3) Allard K2, Basil Panzer (#2) Allard J2, and Sterling Edwards (#10) Edwards R26.

Roy won the race and when his wife came home he is said to have confessed all and promised never to race again.

In 1953 Richter diversified his interests into the manufacture of safety helmets hoping to capture the market occupied by English Cromwell leather head gear which he distributed. The success of the Bell 500 was followed by the first helmet to meet Snell standards the Bell 500 TX helmet in 1957.

Roy followed the diversification into safety equipment with a response to the ‘strength and style deficiency’ in after market performance wheel market sold under the Crager brand name he had acquired from the White estate.

In 1954 William ‘Bill’ Leach acquired Roy’s J2, now painted white, from a third party, Bill raced the car without much success and sold it in 1956 to pursue his interest in horse racing. 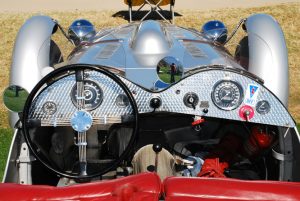 Earlier this year the #1 J2 -1513 was seen at the Dessert Classic, apart from its non period yet apt Cragar wheels, the car is in original immaculate shape, a fitting testament to the extraordinary figure who first owned her Roy Richter.

My thanks to Geoffrey Horton, who initiated today’s blog, Colin Warnes, of The Allard Register, and Bernard Dervieux, the owner, for sharing their photos. Further thanks to Frank, Woody and David at The Nostalgia Forum, to Mr Holland at The Cadillac Forum and Brock Yates of Car & Driver for background information. Hope you have enjoyed this ‘Roy will play’ edition of ‘Gettin’ a lil psycho on tyres’ and that you will join me again tomorrow for a trip to the Atwell Wilson Museum. Don’t forget to come back now !