Welcome to the web site for the Del Monte Trophy Race Group which represents the the Rolex Monterey Motorsports Reunion – 1947-1955 Sports Racing & GT Cars group – every August and which making sorties to other circuits like Sonoma. 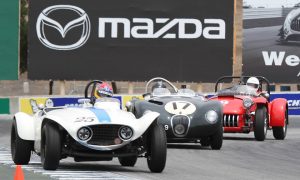 Doug Sallen and I, Rob Manson, would like to thank all of the Del Monte Trophy & broader Race Group 5A participants for your commitment, enthusiasm and great car presentation. This is the fifth year (2019) we’ve all worked to improve the Rolex Monterey Motorsport Reunion experience for all of us and for spectators. We are granted our own row and were thus able to lay out about 25 cars in a way that visually tells the story of the sports cars and specials that brought European-style road racing to the West Coast in the early 1950’s. The spectators love it. It helps foster a community of friends with shared interests. Many of you displayed photos and other interesting period history. The organizers recognized Row Q with the Best Paddock Display award in 2017. 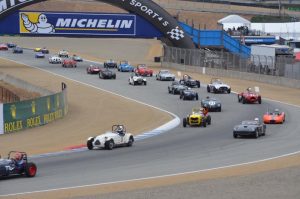 We had 54 Entries in 2017 and 43 in 2018! Several dropped out prior to the event … BUT … we claim victory with the great mix of cars that made up the final 44 car grid in 2017. Entries included: XK 120 Jaguars, Allard J2s, Allard K2s, Big Engine Specials, a Kurtis 500S, Crosley & Panhard engined Specials, MGs, a Morgan Flat Rad and a Triumph TR 2. PLUS, as at Pebble Beach in the early 1950’s, several wonderful examples of UK/European exotica: the Lancia D24/25, C-Type Jaguars, an Aston Martin DB 3S, the Bristol Warrior, a Ferrari 750 Monza, an MB 300 SL and Siatas. We worked to recruit grids that looked like the START of the Pebble Beach Road Races and to have races among similar cars within the Groups . The event’s live streaming shows that we nailed those objectives. The racing was pretty clean and the Group Steward didn’t have much to do! Thank you all for that! More importantly … we all got maximum track time while other groups struggled with black flag and full course yellow conditions.

We were everywhere during Car Week. We had a number of supporting activities that drew strong participation from our Group including the Alvarado Street Run and the Run over the Laureles Grade to lunch at The Quail. At The Quail … Colin Warnes arranged the exhibit of the two time Pebble Beach winning Cadillac Allard J2, in memory of it’s driver Bill Pollack and in support of our Run group. The Pebble Beach Concours d’Elegance created a special exhibition Class for The Specials that Raced at Pebble Beach. Three of the six cars displayed on Sunday had raced in our Group on Saturday. Lastly, we had a well attended wine and cheese get together on Row Q after Saturday’s races that was organized by the Nelson’s with help from the Specials tent and Vince Vento.

Monterey 2017 was a watershed year for the Del Monte Trophy Race Group. We are once again, a large, representative group of great early 1950’s sports cars with a strong community of enthusiastic drivers that we can look forward to racing with.

How would you like to see the Del Monte Trophy Race Group develop? Give us your suggestions.

If you haven’t already done so, please send Rob Manson a 300 word description of your car, with a few of your favorite current and period track photos. Many of you sent those straight on to Marcus Bicknell, so we’ve got those. The Del Monte Trophy Race Group web site, www.DMTRG.com is intended as a Registry and a reference source to be used by anyone interested in our cars and the folks who race them. It will be brought up to date in the next 10 days. Great photos and in car video of our Del Monte Trophy Group at the 2017 and 2018 Pre and the Reunion are coming in from various sources, in particular, Colin Warnes, Lars Mapstead, Marcus Bicknell and Tam McPartland. Marcus is posting them all on the Del Monte Trophy Race Group page at www.http//Facebook.com/hotrodroadracers. If you are not a Facebook regular you can still use the site. Just type in the address above.

Looking forward to the 2020 Reunion.
With Best Regards, Rob Manson and Doug Sallen

Our web site is devoted to 1947-1955 sports racing cars from Pebble Beach and Monterey in the early 1950s, and similar cars based in Europe.  These are the California road racing specials like Old Yeller II, Baldwin Specials, Hageman Jaguar, Manning Specials, Tatum Special and Parkinson Jaguar and the  sports racing cars like the Jaguar XK120s, Allards, Aston-Martins, Ferraris, Kurtises, Maseratis and Mercedes who raced with them.

The site is also a home for a registry of cars in the Del Monte Trophy Group, not just the racers but concours cars also. As of September 2017 the list started with those with images on the Cars page; click on an image for further details.

Alongside is our logo for 2017. The new one at the top is by the delightful motorsport artist David Gentry at GentryArts http://gentryarts.com/. Thank you. 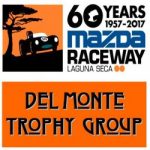 We enjoy warm relationships with other groups involved in cars of this period; do have a look at the following websites if your interest has been stimulated…

Jaguar Clubs of North America      Lars: what other Jaguar club is there for you guys?